We want your thoughts

We do a lot of research on industries, but we’re not in the day-to-day operations. If you have more insight and are willing to share, please contact us!

Non-Fungible Tokens (NFTs) entered the consciousness of a major audience in early 2021. However, the focus was mainly around authenticity of digital art. This was a great first step in raising awareness to the mainstream audience about the existence of the digital art world and NFTs. However, it barely scratched the surface of NFT capabilities and was seen by many as expensive jpegs and mp4s. Team Zero had an opportunity to work alongside Serto and musician, Citizen Cope, to show how NFTs can impact the music industry.

Team Zero is interested in transforming the experience of going to concerts and sporting events using new technologies. We have educated guesses about some of the benefits of using blockchain and Web3 technology in these industries. In our vision statement, we pinpoint 5 areas that we believe can be vastly improved with this technology (Digital Ticket Parity x10, Unlocks, Loyalty, New Collectible & Fan Markets, New Revenue Streams for Artists, Athletes, Organizations and Creators). To understand if our vision has validity, Team Zero builds lightweight experiments using web3 and other technologies and tests them with real customers.

In March of 2021, Serto (a fellow Mesh company focused on Decentralized Identity) and musician, Citizen Cope, approached Team Zero with an opportunity to build a Non-Fungible Token that would double as a ticket to Citizen Cope's show in New York City. Citizen Cope also had a unreleased version of "Something to Believe In" that he wanted to include with the sale. This matched perfectly with Team Zero's vision of NFT unlocks in digital ticket space. We see future tickets not only providing more secure ownership and entry into a space, but having other abilities that outlast the event and keep it memorable.

In collaboration with Serto and Citizen Cope, Team Zero built a microsite to host the special NFT promotional page. Serto created the NFT for Citizen Cope on OpenSea.io that would was to be auctioned off. 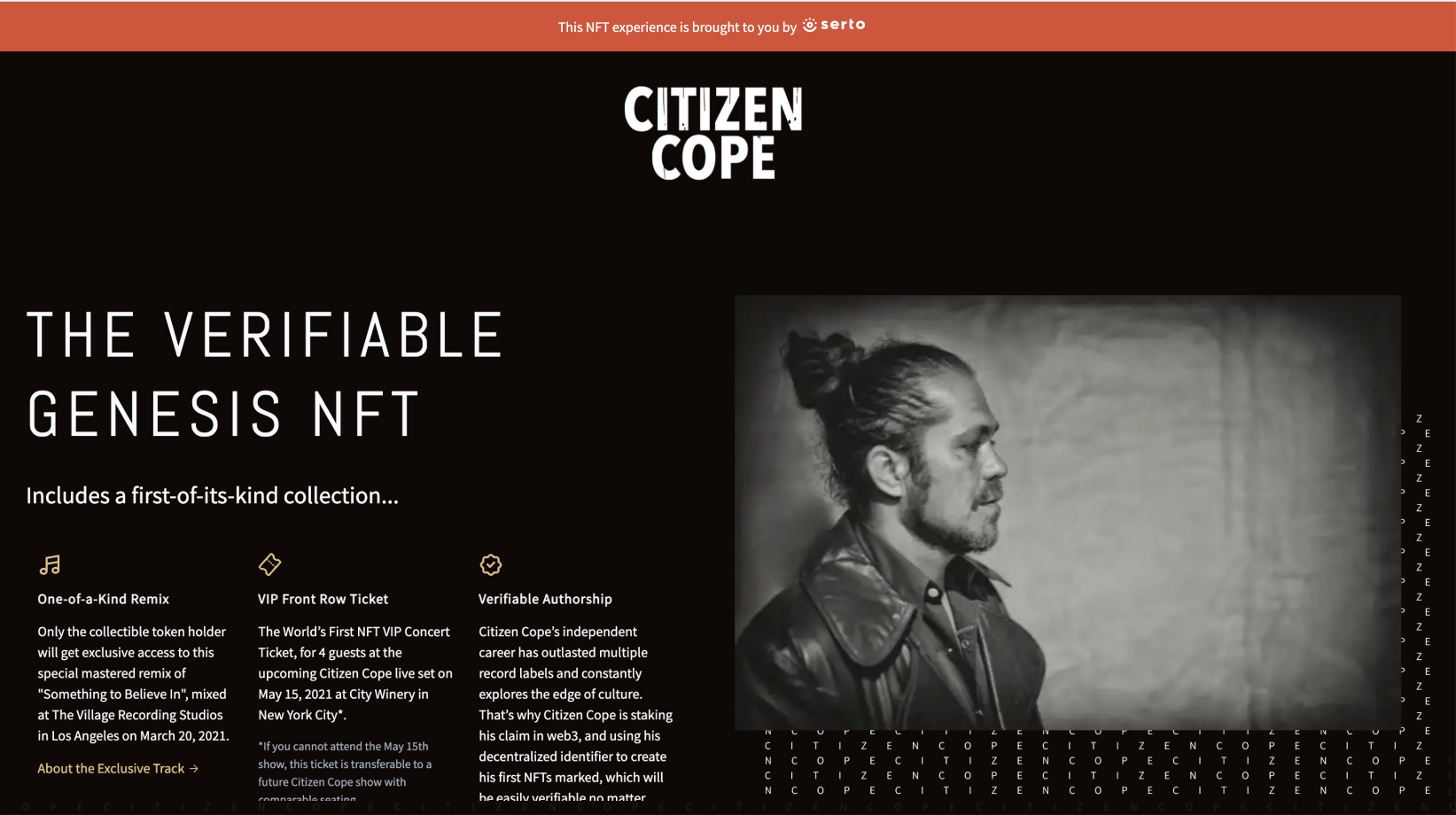 The site had 4 states. There was the pre-auction state, that gave basic information about the auction, what to expect and had a countdown to the auction. The Post-auction had 3 states. The first, if you didn't have a Web3 wallet, those users would get the state that prompts them to get one (and how to get one as well as how to learn about what one is and its function). The page still had information about the auction and concert. The second, If you had a wallet, the site prompted the user to connect to their Web3 Wallet. This allowed the user to connect to MetaMask, WalletConnect, Portis, and Formatic. If the user didn't own the NFT, they were notified that their wallet is connected, but they are not the owner of the NFT. The page still had information about the auction and the concert. The third state was for if the user connected to their wallet and owned the NFT, they got a unique experience tailored to them. It included 4 front-row tickets to Citizen Cope's concert in NYC on May 15. It also included his never before played version of "Something to Believe In" that they could play from the site.

On April 30, 2021, Citizen Cope's NFT ticket was auctioned off and sold for 7.7777 ETH (c. $23,000+) on OpenSea.io. We added a contact area to the microsite to field any questions that the buyer might have. This became a crucial tool as the buyer had contacted us on multiple occasions and provided us with a wealth of knowledge. We had some glitches on mobile and there were expectations that the buyer had that we didn't anticipate. The buyer also asked about certain features. We also noticed some odd conflicts with the OpenSea api.

For the first of its kind, this was a definite success and has provided a lot of feedback on where improvements could be made and fans and artists actually care about. Team Zero is looking to pair up with more artists in the future to push the boundaries further.

We want your thoughts

We do a lot of research on industries, but we’re not in the day-to-day operations. If you have more insight and are willing to share, please contact us!

Brian has been building consumer web and mobile products since 2000. Now in the Web3 space he is looking to bring his product engineering skills to the distributed web. His interests are in protocol development, applied cryptography, decentralized storage, hardware and software prototyping.